“Anything that can go wrong, will go wrong” – Murphy’s Law

I didn’t even see him slip aboard but then again, when it comes to Murphy, you seldom do. He’s tricky and just when you think all is well, he sneaks by you and quickly tosses a wrench into the works. He’s been around since the beginning of time and he rarely misses an opportunity to create havoc whenever and wherever he can. I am convinced he does his finest work while on a boat but I am sure he is a credit to his namesake on land as well.

The air was fresh and strong when we threw off our lines and headed out for an afternoon of sailing, aboard the new Jeanneau Sun Odyssey 469. Sailing with us was John Kretschmer of Sailing Magazine and John Armstrong of Canadian Yachting who had come aboard to assess how this new model of ours would perform. The waves were steep and the current strong as we made our way out of Miami’s Government Cut Channel under power.

I knew that we were seriously low on fuel but I didn’t expect to completely run out; unfortunately, that’s exactly what happened. Damn I thought, Murphy is here. I don’t mind saying, it’s an awkward feeling to lose power while in the middle of a busy shipping channel with lots of wind and tide. Fortunately, we didn’t totally lose our heads and much like Harold with his purple crayon, we came up thinking fast and quickly set sail. We turned on our heel and with the wind behind us, we began sailing back into Miami Harbor. We knew the fuel dock was just in front of us and while sailing to the dock is something more commonly done in smaller boats in calmer conditions on say a lake or cove, we decided to give it a shot.

We approached the entrance to the marina under mainsail alone and at a pretty good clip. As we got closer, I said to my friend and colleague Erik Stromberg, “let’s lose the main, we’ve got plenty of speed.” Erik quickly furled the mainsail just as I made the final turn and headed for the end of the fuel dock which was thankfully unoccupied. Docklines and fenders were rigged and in the final few yards just before we made our landing, Erik gave the engine one last shot to see if there was any life left in it. To our surprise it started and I was able to quickly shift into reverse and make a perfect landing right on the end of the dock just like we had done it a hundred times before. “Well done someone cried, great boat handing!” I smiled to myself and thought… ha, take that Murphy!

With our fuel tank now filled, we headed back out the channel, leaning hard on the throttle in order to make up for lost time. The sea was still steep and the wind still piped hard but all was going well untill Murphy appeared on deck and unexpectedly dumped our anchor and chain over the bow. “Crap” I said under my breath, “this is not good.” John Kretschmer, our fellow crew member, accomplished sailor and the author of several books, rushed forward and begin to deal with the problem. Erik joined him on the bow and together they began the task of wrestling the anchor back on deck and regaining control of the situation. After several minutes, and with the help of a good sharp knife to remove some unwanted fishing line, the anchor and chain were once again back in their designated places. Again we powered forward and once we cleared the last buoy, the sails were hoisted, the engine shut down and the boat took to the sea as she was meant to. It was, in the end, a great day to be on the water and under sail.

In my mind, sailors are a great bunch, they expect the unexpected, remain unflustered when the boat does cartwheels across the waves and while they wouldn’t deliberately invite Murphy to take the wheel, they know that he is always on board and as long as he doesn’t completely sink the ship he is a welcome crew member.

I have to say that I have had smoother test sails in my life. But, if I have learned anything at all, it’s that Murphy’s Law always holds true, “if it can go wrong, it will go wrong.”  It’s just the way life is and in my book, it’s not such a terrible thing. Not everybody can hit a curve ball and if you’re one of the lucky ones who can, it means that you’re just that much further ahead than the next guy.

I’ve always taken the approach that life is meant to be lived on the balls of your feet. This way, when the music suddenly changes, you can quickly change tempo and dance away to the new beat. 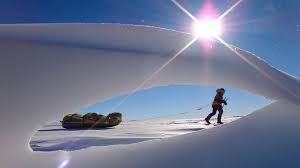 Several years ago some friends took  me into Washington, DC to watch the best of the Banff Mountain Film festival, a series of award-winning short films created by outdoor thrill seekers.The actual festival takes place in Banff, Canada where the world’s best mountain films, books, and speakers take the spotlight for nine days bringing to life the adventure of climbing, mountain expeditions, remote cultures, and the world’s last great wild places. I have never been to the actual festival but each year they take the very best of the show on the road, and each year I make it a point not to miss it when it comes to Washington. It is quite frankly, amazing and I always look forward to seeing it.

stralia (Cas and Jonsey) who were determined to be the first to make the trek from the edge of Antarctica to the South Pole and back; 1,400 miles unassisted, on skies, pulling 300 pound sleds across the frozen ice. The first half of the trip would take them sixty days, some days marching thirteen hours at a clip in complete white-out conditions against fierce winds and frigid temperatures. The entire trip would end up taking them 90 days. At times, the film was difficult to watch; I could almost feel the pain and agony these two guys were going through.

wist of the adventure came before they even started when they learned that an experienced Norwegian adventurer, Aleksander Gamme, would also be attempting to make it to the Pole and back at the same time. In other words, now it was not only a trek but also a race. Traveling alone and with considerably more experience traversing ice and snow, Gamme quickly out paced the Australians and was well on his way to upsetting their plans. Strangely however, the three adventurers, via the sat. phone, became friends, kindred spirits really, as they each battled the elements day after day.

In the end, as Cas and Jonsey were only two miles or so from the finish, they spied in front of them their fellow adventurer and now soul mate, Alexander Gamme. He had camped for two days, waiting for them so they could all cross the finish line together.

As I left the theater and made the drive home to Annapolis, a host of thoughts raced through my mind; not just about this particular film about two guys pulling a sled across the ice but about all the films. They all shared a common thread, specific elements that were clearly at the core of these outdoor adventurers. Values such as vision, success, focus, hard work, personal relationships, trust, unselfishness, goal oriented, shared expectations, shared common objectives, risk takers, teamwork and spirit were the elements that were clearly evident. The more I thought about it the more I saw the commonalities between those companies that we love to do business with and those adventurers that go off to blaze new trails, setting new records and discovering the unknown.

a, we do our best to approach our business with much the same optimism, spirit, and teamwork that enabled Cas and Jonesy to complete their journey across the ice. Being in the luxury yacht business, times have not exactly been easy these past few years but despite this, we have experienced solid growth, introduced several new models, found our way into a few new markets and managed to have fun along the way. Our success is largely due first and foremost to the fact that we like what we do, we have fun doing it, we believe in the boats that we build and we believe that as a team, we offer something real and meaningful to our customers. In short, we share the idea that we want to be a company that people like to do business with and we enjoy doing what it takes to earn that privilege.

Finally, a few last words about Alexander Gamme. When asked why he waited for Cas and Jonsey to reach him before crossing the finish line, he replied

“Waiting for them in the end it felt very natural. I liked them from the very first moment. I saw myself in them. I enjoy going solo, but to finish and to celebrate alone, it’s not fun.”

I think there is a lot of wisdom here. While winning is a great thing, it’s not the only thing (Lance Armstrong, note to self). And, I think for a company or an individual to be truly successful, they need to respect and appreciate their competition and recognize that part of their own success is due to the success of those that are behind them, pushing them to be faster and better. Humility is an attractive personality trait. Practicing humility is not always easy but it’s a good thing to do.

P.S. Join Cas and Jonsey for a quick preview of their award winning film Crossing the Ice

Find me on LinkedIn